Arterial Network South Africa (ANSA), in partnership with the National Arts Festival, will host one of its popular #ArtOut events at the 2017 festival in Grahamstown. 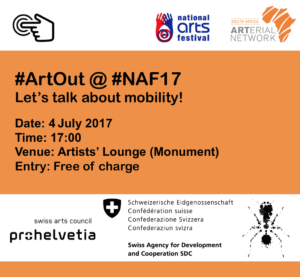 Supported by an ANT Funding Grant from Pro Helvetia Johannesburg financed by the Swiss Agency for Development and Cooperation (SDC), three festival representatives from the SADC region will attend this year’s festival in Grahamstown.

“In addition to this event kick-starting an important discussion ANSA is passionate about, we hope that the attendance of these delegates, who will also form part of the festival’s Th!nkFest programme, would serve as a catalyst for collaboration in the future,” says ANSA Chairman, Pieter Jacobs.

The #ArtOut event is scheduled to take place on the 4th of July at the Artists’ Lounge at the Monument at 17:00. Entry is free of charge.

Additionally, SADC delegates will engage in a facilitated discussion around the complexities of curating a creative programme as well as reflect on the impact of technology on festival programming as part of Th!nkFest on 5 July presented at the Ntsikana Room at the Monument at 12-noon. Click here for the Th!nkFest programme. 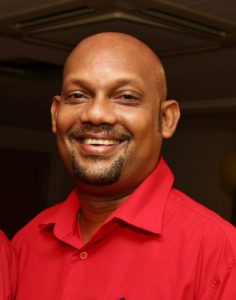 Galen Bresson is currently the CEO of the newly formed Seychelles government agency Creative Industries and National Events Agency Seychelles. The agency’s primary role is to promote all sectors of the creative industry of Seychelles in trying to turn the industry into a valuable pillar for the economy.

Apart from his role in the development of the creative industry, Galen Bresson was elected to the first ever copyright society of Seychelles “Seychelles Authors Composers Society (SACS)” over 11 years ago, first as an ordinary member but currently holds the seat as the financial officer on the board.

Prior to his current role, Galen Bresson was an elected member of the National Assembly of Seychelles. It was during his mandate that most legislation in regards to Intellectual property was adopted.

In the private sector, Galen spearheaded the start of the second Internet company “KOKONET” in Seychelles in 2000 which revolutionised internet connectivity through wireless technology. Leaving the internet industry, he lead the introduction of the first pay TV platform “DSTV” in Seychelles.

He has also been instrumental in setting up the second FM radio in Seychelles, been four years part of the organising committee of the “Carnival International Seychelles” and several other prominent events in Seychelles and abroad.

Galen earned his Bachelor Degree in Education at Warwick University UK in 1997. It was at university that he discovered the industrialisation of the creative industry and has since been at the forefront of many new initiatives in Seychelles.

Her work ranges from overseeing the entire production of the festival from conception to implementation, each year striving to come up with more creative ways of expanding the reach of the arts and the exposure of Zimbabwean artists through the Shoko Festival platform. The disciplines showcased at the festival are Music, Comedy, Spoken Word and New media.

These programs are designed to create space for alternative voices, and for people to be able to express themselves freely. Natalie has also written social commentary articles for Kalabash media, and has worked as a satire comedy actress and scriptwriter for Zambezi News.

Natalie Kombe holds a Bachelor of Arts degree in Drama and Classical Civilizations (Rhodes Grahamstown) and a BA Hons in Filmmaking (AFDA Capetown). She has over 11 years of experience in the arts industry, having previously held positions as the Youth Zone consultant at HIFA (Harare International Festival of the Arts) and as the festival coordinator at ZIFFT (Zimbabwe International Film Festival Trust). 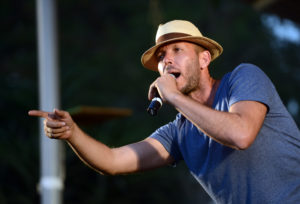 Jiggs Thorne, performance poet, artist and visionary art director is the creator of House on Fire, instigator and director of The Bushfire International Festival of the Arts and founding member of Igoda, a Southern African Music Festival Circuit, facilitating the movement of artists, inspiring collaboration, and celebrating music and culture.

House on Fire, a truly unique performance arena in the Kingdom of Swaziland, has been lauded as “one of the most eclectic venues in the world”. Hosting an array of performances and artistic development workshops throughout the year, The annual Bushfire Festival, is the pinnacle of House on Fire’s performance programme.

Seeking to utilise the arts as a platform to encourage cultural and intellectual exchange, the Bushfire Festival, (recognized by the BBC as “Africa’s Top Festival”) is now in its second decade, and attracts an audience of over 25,000 visitors. Featuring three days of leading international and regional artists in theatre, music and interactive performance, the Festival has inspired the creation of the Southern African Music Festival Circuit.

Jiggs’ vision for the development of the arts in Southern Africa is to create platforms of expression to address meeting points of culture, and aid in collaborative discussions on challenges facing all of us from community to global levels. 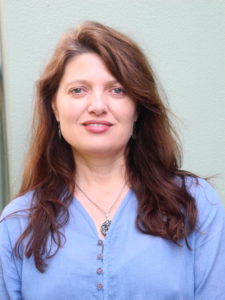 Yvette Hardie is a theatre producer, director, educator, and writer active in the world of theatre and performance, with a particular focus on theatre for young audiences.

She initiated the launch of ASSITEJ SA (the national centre of the International Association of Theatre for Children and Young People) in 2007, and leads the organisation in the capacity of National Director. She is serving her third term as elected President of the international ASSITEJ (2011-2020), which has centres in almost 100 countries. She sits on the board of Global Arts Corps the organisation, which sprang from the award-winning theatre production she was responsible for touring globally, Truth in Translation.

She has written and spoken extensively on issues relating to arts for young audiences, arts education and arts for reconciliation and conflict resolution at events around the world. She was responsible for bringing the 19th ASSITEJ World Congress and Performing Arts Festival to Cape Town in May 2017. This was the first time that this mega-event, titled Cradle of Creativity, was held in Africa in the 52 year history of the international association. 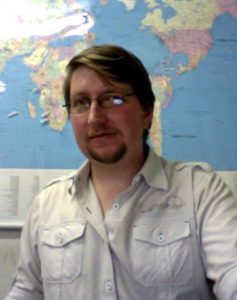 Dedicated to arts development, James E French works to promote and encourage the arts in South Africa. He has an Honours in composition and a Masters in Arts & Culture management from the University of the Witwatersrand.

James was successful as a composer and arranger, most notably having been part of projects with visual artists that traveled to the Guangzhou and Venice biennials. His focus turned to arts management in the early 2000’s where he took on the role of the administrator at the Bag Factory Artists’ Studios in Newtown. He worked to sustain the visual arts organisation for 14 years and became its Deputy Director, before handing the organisation over and taking on his present role as the Manager of SAMRO Foundation – the Corporate Social Investment arm of the Southern African Music Rights Organisation (SAMRO).

Based from Johannesburg, James continues on his mission to find solutions to the challenges between the arts, business, entrepreneurship and sustainability. 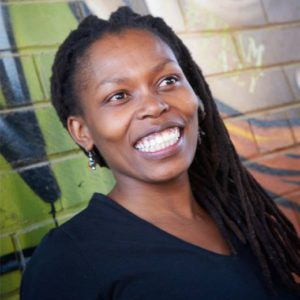 For 8 years she worked in the advertising industry, working on both above-the-line brand campaigns and below-the-line promotional and eventing concepts. This combined, cross-capability and cross-category communications experience has included strategic, concept and design work on already-established leading brands cross-sector – retail, financial, FMCG, IT, transport, charities and more.

Post advertising, Violet has worked on music productions in Malawi and Angola, and lived in Zanzibar working at Sauti za Busara, one of the biggest music festivals in the East African region.

Currently she lives and works in Johannesburg, on a passionate quest to help build the arts and the culture landscape.

Arterial Network South Africa (ANSA) is one of 40 National Chapters making up Arterial Network. The Chapter has been operating since 2010 and currently focuses on arts and culture policy and continental cooperation and collaboration. For more information please visit http://www.arterialnetwork.org.za.

Presented by Arterial Network South Africa (ANSA), #ArtOut is a series of public events open to practitioners, administrators and industry players to convene and discuss industry concerns in a casual yet focused environment.

About the National Arts Festival

The National Arts Festival is an important event on the South African cultural calendar, and the biggest annual celebration of the arts on the African continent.

Starting at the end of June/beginning of July, it runs for 11 days in the small university city of Grahamstown, which is situated in the Eastern Cape, 130km from Port Elizabeth.

The Festival comprises a Main and a Fringe programme, which are both administered by the National Arts Festival Office. The Festival is reliant on sponsorship with the core sponsors being the Department of Arts and Culture, the Eastern Cape Department of Sport, Recreation, Arts and Culture and the Office of the Premier, and Standard Bank of South Africa. Media partners include M-Net and City Press newspaper.

The event has always been open to all regardless of race, colour, sex or creed. As no censorship or artistic restraint has ever been imposed on works presented in Grahamstown, the Festival served as an important forum for political and protest theatre during the height of the apartheid era, and it still offers an opportunity for experimentation across the arts spectrum. Its significance as a forum for new ideas and an indicator of future trends in the arts cannot be underestimated.

Pro Helvetia Johannesburg has for some time been investing in transnational collaborations, exchanges and joint projects among organisations and creative practitioners operating across the SADC region, with support from the Swiss Agency for Development and Cooperation (SDC). Their investments are focused on projects, networks and platforms that have a shared interest in building a stronger regional creative fabric.

The focus of ANT Project funding is threefold: