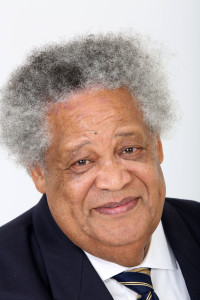 Following the success and well received inspirational Icon’s Talk with Caiphus Semenya in 2016, the talk and networking session will be presented by the 2015 ACT Lifetime Achievement Award recipient for Arts Advocacy, Dr. Ramakgobotla Johnny Mekoa.

The Jazz legend’s talk, structured around the re-birth of music traditions that were destroyed by the apartheid regime, will focus on how township Big Bands (which are now just referred to as Jazz Bands) is a space where young black musicians can learn how to play musical instruments.

Affectionately known as Johnny Mekoa, the legendary trumpeter and music educator developed a passion for Jazz music at an early age and aspired to become a Jazz musician. In 1964 he tried to enroll for a course in music but was turned away because of his race. He held on to his dream and today he is an renowned musician and arts educator.

In the early years of his career, he would play for audiences at night clubs across Johannesburg, including in Sophiatown. His ambition to study music only materialised when he was 41 and in 1991 he graduated with a bachelor’s degree in music at the University of Natal. He then obtained a Fulbright Scholarship to study for a Master’s degree in Music at the University of Indiana in the United States.

In 1994, Mekoa returned to South Africa and established the Music Academy of Gauteng, which focuses on developing young aspiring Jazz musicians. It has become a centre of Jazz excellence, with alumni such as Malcolm Jiyane, Mthunzi Mvubu, Mpho Mabogoane, Nthabiseng Mokoena and Linda Tshabalala to mention but a few.

The Icon’s Talk will be held in Johannesburg on the 18th of February 2017 and is only open to current SAMRO members. To accommodate members outside of Johannesburg the talk will be recorded and a video will be shared on SAMRO and ACT’s social media pages where people will be invited to direct questions to Dr. Mekoa.

The RSVP deadline is close of business on the 13th of February 2017 and space is limited to 40 SAMRO members, only members who have confirmed their attendance and are on a list will be permitted to attend the talk. Click here to RSVP. To become a SAMRO member please click here. For more information about the event please email Karabo Legoabe at the Arts & Culture Trust at projects@act.org.za.

Dr. John Mekoa’s accolades and notable achievements: Dr. Mekoa’s excellent work has seen his centre being awarded the prestigious International Jazz Education Network Award in five consecutive years. The late renowned American Jazz legend, Dr. Billy Taylor, who served on the advisory board of the International Association of Jazz Education Network took pride in the achievements of the academy. Dr. Mekoa has also been bestowed with two honorary doctorates by the University of Pretoria and University of South Africa respectively, for his excellence in music and contribution to society. He was also bestowed a Life Achievement Award by the Swedish Jazz Federation and further received numerous Mayoral Awards by the Ekurhuleni Metropolitan Municipality. He played a very important role in the establishment of the now called Standard Bank Youth Jazz Orchestra that takes place annually during the National Arts Festival in Grahamstowm. He is also a past President of the South African Jazz Education Network. Dr. Mekoa also serves on and contributed immensely to the boards of two prominent organisations in the country, the SAMRO Endowment of the National Arts and the Unisa Music Examination boards.

The Arts & Culture Trust (ACT) is South Africa’s premier independent arts funding and development agency. The primary aim of ACT is to increase the amount of funding available for arts and culture initiatives, and to apply these funds to innovative, sustainable projects that make a meaningful contribution to society. Through structured funding and development programmes, ACT provides support for all expressions of arts and culture, including literature, music, visual art, theatre and dance, and the support extends to festivals, community arts initiatives, arts management, arts education and arts administration. Follow ACT on Twitter or like the Trust’s Facebook page or visit the ACT website.

The Southern African Music Rights Organisation (SAMRO) was established in 1962, with the key objective to protect the intellectual property of its composer, songwriter, and publisher members, the organisation’s primary focus is to administer the various music rights of Copyright on behalf of writer and publisher members. The collecting society, as it is known, is mainly concerned with the collection of license fees for the use of its members’ musical works by various music users, the distribution of royalties to these members, and the promotion of Copyright law. For more information click here.