One of South Africa’s most revered musicians, Johnny Clegg, has been honoured with the Arts & Culture Trust (ACT) Lifetime Achievement Award for music. Sponsored by SAMRO and the National Lotteries Commission, the Award aims to celebrate Clegg’s fruitful career. 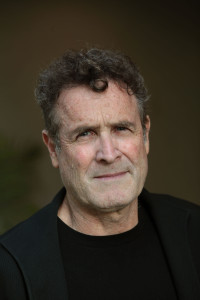 Clegg, who is sometimes referred to as Le Zoulou Blanc (The White Zulu) has been an iconic figure both locally and internationally, ever since his band, Juluka, released their first album in 1979.

He says receiving his trophy at the ACT Awards, which were held at Sun International’s The Maslow Hotel in Johannesburg on Friday, 21 October, felt “jolly good”. Lifetime Achievement Award winners, who are nominated and selected by the current and previous ACT Trustees, are fundamentally individuals that the sponsors are proud to acknowledge for their contribution to the arts.

The musician and anthropologist, who counts sharing a stage with Nelson Mandela in Frankfurt in 1997, while Madiba sang Asimbonanga (with him?), as a career highlight, has produced over 19 albums in his career; as a soloist and with his bands Juluka and Savuka.

Originally from England, Clegg was first introduced to South African music when he heard a street musician, Mntonganazo Mzila play. Enchanted by what he heard, Clegg apprenticed himself to Mzila for two years, learning the basics of Zulu music and Inhlangwini dancing. 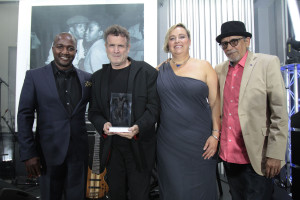 When the political climate of South Africa began to take its toll on the group in the mid-’80s, Clegg and Mchunu separated. Clegg then formed his second band, Savuka, which took its name from the Zulu word meaning “we have risen” or “we have awakened,” and took a more pop-minded approach to African music.

Clegg reunited with Mchunu in the mid-’90s to tour and record under the Juluka name, he then turned to solo work in the late ’90s. In the new millennium he returned to the studio to complete the 2002 solo release New World Survivor. Clegg found a home at Appleseed Records for 2010’s Human. His latest album, a concert set recorded in the fall of 2013, Best, Live & Unplugged: At the Baxter Theatre Cape Town was released in 2014, also from Appleseed. 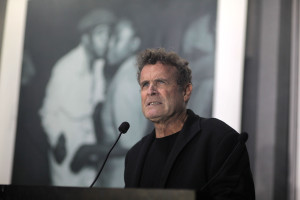 “Culture is the prism through which communities construct their identities and vision of their future,” says Clegg. “It is the deepest frame of reference a person can have because it includes language, values, beliefs, sentiments, art, technology and all the customs and practices a community employs to make sense of the world. It is a shared road map and multi-layered compass offering solutions to problems all humans experience. These solutions are passed down by one generation to the next and is what we call cultural tradition.”

Tiyani Maluleke, the General Manger of Marketing at SAMRO echoes Clegg’s musings on the importance of arts, culture and heritage in South Africa; “Since time immemorial, the arts have played a role in educating and uniting the people of South Africa. Music in particular has been a part of South African culture, defining certain eras and expressing our love, our pain, our losses as well as our victories. Art is part of the many ways in which we express ourselves as South Africans.”

“For over 50 years, SAMRO has played a leading role in the administration of musician’s royalties in Southern Africa,” Maluleke continues. “As an organisation, we believe deeply in the development and recognition of South African composers and our participation in various platforms speaks to that commitment. It is for this reason that SAMRO has again sponsored this category.”

Clegg, who believes that success in the music industry is not gained by talent alone, but through hard work and a firm understanding of the industry, says his wish for the new wave of the country’s musicians is “strength and stamina in the pursuit of their arts”. “And, never listen to the naysayers,” he concludes.

The Arts & Culture Trust (ACT) is South Africa’s premier independent arts funding and development agency. The primary aim of ACT is to increase the amount of funding available for arts and culture initiatives and to apply these funds to innovative, sustainable projects that make a meaningful contribution to society. Through structured funding and development programmes, ACT provides support for all expressions of arts and culture, including literature, music, visual art, theatre and dance, and the support extends to festivals, community arts initiatives, arts management, arts education and arts administration. Follow ACT on Twitter or like the Trust’s Facebook page or visit the ACT website.

The Southern African Music Rights Organisation (SAMRO) was established in 1962, with the key objective to protect the intellectual property of its composer, songwriter, and publisher members, the organisation’s primary focus is to administer the various music rights of Copyright on behalf of writer and publisher members. The collecting society, as it is known, is mainly concerned with the collection of license fees for the use of its members’ musical works by various music users, the distribution of royalties to these members, and the promotion of Copyright law. For more information, please click here.

The National Lotteries Commission (NLC) relies on funds from the proceeds of the National Lottery. The Lotteries Act guides the way in which NLC funding may be allocated. The intention of NLC funding is to make a difference to the lives of all South Africans, especially those more vulnerable and to improve the sustainability of the beneficiary organisations. Available funds are distributed to registered and qualifying non-profit organisations in the fields of charities; arts, culture and national heritage; and sport and recreation. By placing its emphasis on areas of greatest need and potential, the NLC contributes to South Africa’s development. For more information, click here.